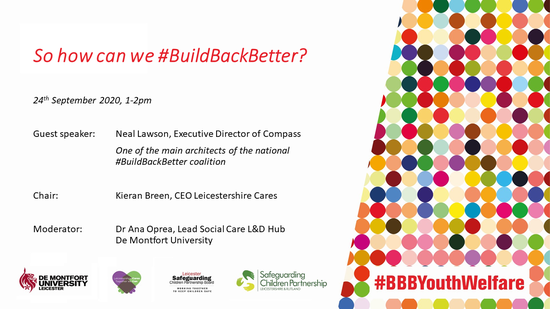 We have been working in partnership with, De Montfort University, and the Leicester, Leicestershire, Rutland Safeguarding Children Partnerships and a wide range of local and national organisations to put together a series of webinars looking at how we can improve services, support and opportunities for young people. This is all part of our “Together” Initiative supported by The National Lottery Community Fund.

The series kicked off on Thursday 24th September with an overview of the #BuildBackBetter movement, with guest speaker Neal Lawson who is the executive director of compass. There was a wide range of participants including local councillors, community and business leaders, council and government staff as well as academics and think tanks.

Neal shared how complex it has been getting a coalition of 350 organisations from across the political, community and business world to sign a single statement. Yet he believed passionately that real change happened when ideas were formulated and developed across the political, business and community spectrum. His sense was that there was appetite for change and many of the ideas people are talking about such as green new deal or universal basic income have been developed, What he felt was stopping change was a political system that is still too top down and based on competition rather than cooperation and short rather than long term.

In a lively Q&A session moderated by Dr Ana Oprea, Neal stressed “AND, is an important word in politics it joins things up” and leaders need to be agile and open to listening so they can build coalitions or change. Compass has developed a model of 45 degrees

the potential meeting point of bottom-up emerging activity and top-down state support – the diagonal faultline through which a new society can and must emerge. This line is the place for a truly new politics.

Participants stressed the importance of national government supporting and enabling local government to respond to local demands and issues. Local councillor and Assistant Mayor Danny Myers shared his recent experience of dealing with Covid 19 and how it worked better when the local council had control.

Neal also stressed how important it is for business to be involved in change and that increasingly good business goes hands in hands with a commitment to supporting and improving your community. The response to Covid 19 had shown that at a local level creative, agile partnerships often powered by the internet could be built. As we move forward, we need to need to build on these emerging structures.

People also felt that often young people are excluded from decision making but increasingly young people are developing their own ways of organising often using social media. Community media was crucial in creating a “local space” for people to share local ideas and perspectives.

We all know that when business, community and local government supported by national government work together, it makes us far more likely to achieve lasting change, none of us have all the answers but all of us have the answers.

The next webinar will be on 28th October at 1300 and will be looking at how we improve the support we can give to care experienced young people.