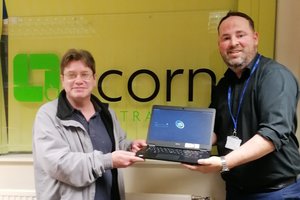 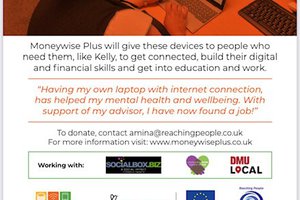 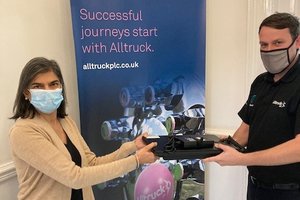 We have been working in partnership with MoneywisePlus , DMU Local and Socialbox Biz to encourage local people and firms to donate old laptops, Tablets and Mobile phones, which are wiped clean, upgraded and passed onto people who need them. This simple and green solution has made a huge difference to a lot of people.

Edward started the Moneywise Plus project with little knowledge of digital skills, feeling that in a world where people are becoming more and more reliant on computers, he was at a disadvantage. Having been out of the labour market, he felt that his lack of IT skills was becoming a hindrance in both his ability to find work and manage his finances. This led to Edward having low self-esteem and confidence.

When Edward met his advisor, Stuart, they sat down and made a step-by-step plan to teach Edward needed skills for both using technology and for managing his finances. Stuart also helped Edward research and apply for schemes such as Severn Trent's trust fund and set up a new bank account to help alleviate financial concerns.

Since being a Moneywise Plus participant, Edward has also received a Laptop and Smartphone from the MoneywisePlus device donation scheme which has taken away the financial burden of having to find and buy these devices himself. With these devices, Edward has been able to access mobile banking, update his CV, check his email, and look for a new career. Having the ability to use these devices has also increased Edward's confidence and self-belief that he will get back into the job market with a stronger idea of the skills he can offer to potential employers.

Edward still has some things to learn but is on track to finishing the Moneywise Plus project with some newly acquired skills to help in both his professional and personal life.

It has been great seeing local companies like Joules, Cambridge and Counties and Alltruck, stepping up donating laptops, and making such a huge difference to so many people and huge thanks to MoneywisePlus for making this possible.

We think this is another great example of business and community working together in creative and green way so nobody is left behind.

For more information on how you can support this work by donating an old Laptop, Tablet or Mobile phone, email amina@reachingpeople.co.uk

More info on Moneywise Plus https://www.moneywiseplus.co.uk/

Why we need to tackle the Digital Divide https://www.leicestershirecares.co.uk/about-charity/news-events/digital-access-right-or-privilege/